Boardrooms are often the place of heated debate over a range of matters affecting the operations of an organisation. Vigo 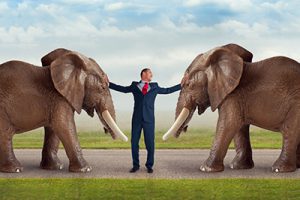 rous discussion that airs all possibilities can sometimes be beneficial (and necessary) when making critical decisions which will ultimately determine the future direction of a company. Can heated debate or vigorous discussions in a boardroom amount to bullying?

It is not unusual for egos to be tested and tempers tried when board members, equally passionate about the best interests of an undertaking, engage in tactics, strategies and politics to put across their point of view.

But, if strategic ‘play’ is perceived as bullying, does a member of an executive committee have recourse to make an application under the Fair Work Act 2009 (Cth) (the Act)?

The question arose in Trevor Yawirki Adamson [2017] FWC 1976 and the answer is ‘yes’. The Fair Work Commission took a broad view of the term ‘worker’ to allow a board member to bring an application for a stop bullying order.

The case sends a clear message to companies that certain antics in the boardroom could potentially be perceived as bullying, leading to actionable claims.

The Executive Board of APY Inc consists of elected members and Mr Adamson was Chairperson at the time of applying to the Fair Work Commission for a stop bullying order. Broadly, Mr Adamson’s application raised allegations of other board members:

At the time of determining the matter, Mr Adamson (after failing to be re-elected) was no longer Chairperson and ultimately, the Commission did not make a finding on the merits of the anti-bullying allegations.

The case therefore turned on jurisdictional matters, namely whether Mr Adamson had standing as a ‘worker’ to bring an application for an anti-bullying order.

The Act provides that upon application of a ‘worker’, the Fair Work Commission has power to make any orders considered appropriate to prevent a worker from being bullied at work by an individual or group of individuals.

In making an order, the Commission must be satisfied that bullying has occurred at work and there is a risk that the applicant will continue to be bullied. The order may apply to the employer, an individual or group of employers, co-workers or visitors to the workplace.

The focus is not to compensate the applicant, but to resolve the matter so that working conditions and relationships are restored.

The Act defines a ‘worker’ by reference to the Work Health and Safety Act 2011 (Cth) (WHS Act). This broadly includes a person who carries out work in any capacity for a person conducting a business or undertaking (PCBU), including as an employee, contractor, subcontractor, outworker, apprentice, trainee, student gaining work experience, or a volunteer, except a person volunteering with a wholly volunteer association.

The respondents claimed that Mr Adamson was not a ‘worker’ as defined by the Act and, consequently lacked the capacity to make the application. They argued (amongst other matters) that:

Commissioner Hampton rejected these arguments, finding on the facts, no suggestion that APY Inc was not a PCBU nor was Mr Adamson in his capacity as Chairperson a volunteer within the meaning of the WHS Act.

The following matters were relevant in Commissioner Hampton’s determination:

Key take outs from the case

Whether certain antics in your boardroom will constitute bullying depends on the circumstances of the case. However, the Fair Work Commission has now confirmed that a board member is considered a ‘worker’ and may bring an application for a stop bullying order.

Board members and companies should implement policies and codes of conduct to be used as models for appropriate behaviour in the boardroom. Policies should include mechanisms for resolving disputes such as mediation with regular training provided to board members with respect to bullying and other work health and safety obligations.

If you or someone you know wants more information or needs help or advice, please contact us on (07) 4724 1016 or email admin@dhlaw.com.au.

Donnie Harris is an Accredited Specialist in Business Law (Qld) and has experience in delivering quality legal services to business owners throughout Queensland.